The Liceo Artistico was founded in Orvieto in 1970 as an Art Institute, as an educational and professional response to a cultural need particularly felt in a territory of great historical and artistic traditions. Until 2009, its historical site was the important Renaissance palace, “Sforza Monaldeschi della Cervara” building, by Antonio da Sangallo and Raffaele da Montelupo.

On 1 September 1997 the Istituto Statale d’Arte and the Liceo classico FA Gualterio, located in two prestigious Renaissance palaces in the heart of the historic center, a few meters away and close to the most important cultural institutions of Orvieto, were aggregated under a single presidency and set up the Institute of Higher Artistic and Classical Education.
Since 2009, after the earthquake, the Liceo Artistico has been forced to abandon the ancient and seat for security problems and move temporarily via the Palazzina Comando at the former Caserma Piave, a large and prestigious structure.

In 2013-2014 the Liceo Artistico is aggregated to schools located in the town of Orvieto and in 2014-2015 once again changes form and leadership, but continues to represent, for the entire area and the neighboring regions, an important point of scholastic and professional reference for the attention paid to the delicate balance between unitarity and specific differentiation of the various paths but also giving answers to rich and differentiated training needs: Architecture and the Environment, Graphics, Figurative Arts, Audiovisual-Multimedia. 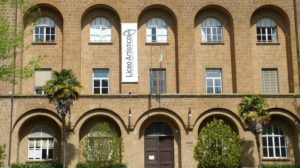